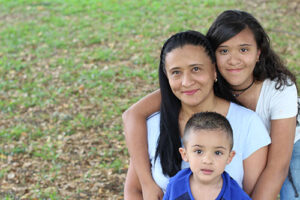 “I had arrived recently in this country with my 8-year-old son, and we were living with my sister and brother-in-law. I met a man at a grocery store and began establishing a conversation that led to a nice friendship. After a couple of months, we became closer in our relationship. I had fallen in love with him, and we decided to become intimate.  After several weeks I began experiencing some symptoms like those I had experienced when I was pregnant with my son. Fear came over me, and I decided to get a pregnancy test at a local Planned Parenthood office. As feared, I was pregnant. The office counselor told me about the options that were available through their services and costs. Not sure of what to do, anxiety built up. I immediately called my boyfriend from the parking lot and told him about the situation. He did not say much and told me we would talk later. At that point I was ready to go through abortion, but was short of money. As I was leaving the building I saw a couple of people praying and they handed me a brochure about the Gabriel Project. I called them and a couple of volunteers came to my home during the evening and gave me spiritual support and hope. They gave me a sense of real love and genuine help. My daughter is now four months old and they continue helping me. I thank God every day that he helped me make the right decision, I am so happy with my daughter and my son loves his little sister.”

“It is not easy being a single mother, options can seem limited. Navigating through the system of WIC, Medicaid, and social services is not an easy task. The Gabriel Project, through the Catholic Diocese of Oakland, and several community organizations were there to help me”.

“The Gabriel Project provides the support for women who say “I am pregnant, I do not know what to do. I know that I am not alone; there is help regardless of my religious background.”

“The Gabriel Project volunteers want to help frightened women by showing them that there are options other than abortion. To support them, and their children, helping them grow spiritually as well as personally”.

Rosie, who was a mother of Gabriel Project back in 2019. “They were there for me; they helped me through the pregnancy. They helped me connect with the WIC program as well as food stamps. If it were not for the charity of individual parishioners, we couldn’t have made it in the beginning.”